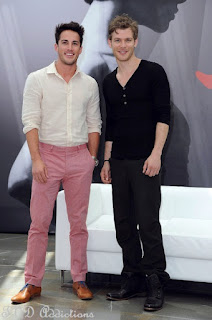 Speaking from the 52nd TV Festival in Monte Carlo, which both Joseph Morgan and Michael Trevino attended, Michael tells us how it would be hard to rid The Vampire Diaries of Joseph Morgan aka Klaus.
“The Vampire Diaries” seemingly ushered out one of its most beloved cast members – Joseph Morgan – when Klaus’ body was staked and possibly destroyed in The CW show’s Season 3 finale, but Michael Trevino doesn’t think his cast mate is gone for good.
“I’d have to say, it’d be really tough to get rid of Joseph Morgan on our show, I would imagine that he’d be back in some capacity real soon,” Michael, who plays werewolf-vampire hybrid Tyler Lockwood on the drama told Access Hollywood at the Monte Carlo Television Festival on Thursday.
As fans know, Klaus actually took over Tyler’s body, so the question that remains is where is the real Tyler?
“We don’t know,” Michael told Access. “I mean, at this point, honestly, because Klaus is in Tyler’s body, we don’t know what’s gonna happen when Klaus gets back into his body. We don’t know where Tyler’s gonna be or what his fate is gonna be at that point.”
If Klaus’ body still exists, that is.
In the meantime, while Klaus is using Tyler’s face, it sounds like he’ll be taking another shot at the woman he continues to lust after – Caroline.
“One would assume that if you’re Klaus and you’re in Tyler’s body, you’re going to take advantage of that, and maybe make a play again at Caroline because you’ve been trying so hard to steal her from Tyler,” Michael said. “I would imagine in the first episode something like that’s gonna happen.”
Playing a new role on the show has come with its challenges for Michael, but he’s enjoyed trying to embody Klaus/Tyler.
“I told myself not to imitate how Joseph Morgan plays Klaus. I think it was more of a just ‘keep it real subtle’ and what I can tell from Joseph, as anyone who watches the show sees, he’s really focused in and very direct with whoever he’s doing the scene with,” Michael explained. “So I took that note and kind of just ran with it and sprinkled my own little Klaus mannerisms in there… Just a little flavor. He’s a Brit. I want to throw my little swagger in there.”
source
Posted by Unknown at 22:39 No comments: 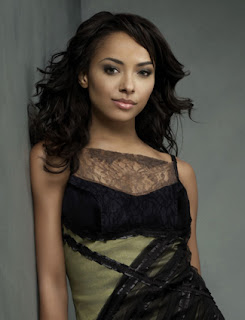 12th June 2012
Any Vampire Diaries scoop on Bonnie?
Her decision in the finale to help Klaus take possession of Tyler’s body (all for the greater good and unbeknownst to everyone) sets up a very interesting Season 4 for Elena’s BFF. “This is Bonnie’s ‘I am witch woman, hear me roar’ moment,” declares Vampire Diaries EP Julie Plec. “She went and made a decision that she felt was best for the people that she loved, consequences be damned. Bonnie is the true hero in all of this, if you really look at it. She came in and found a way to save the day. Had she not done what she did, all of our heroes would be dead… We’re just seeing the beginning of growth for her, exploring who she is and what it means to be a witch and how she feels about it.”
I need some Vampire Diaries scoop on Delena.
Although not specifically about the star-crossed duo, Plec reveals that Year 4 will be the Season of Transition. “Every character is growing up and graduating, so to speak,” she says, “and setting up the future of their grown-up worlds outside of Mystic Falls… Or maybe not.”