Vampire Diaries Spin Off Show To Air In April 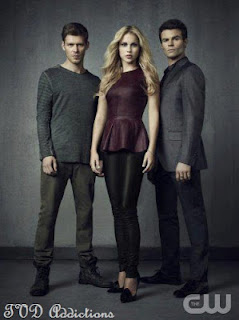 Huge Vampire Diaries news: The CW is officially developing a spinoff for the Thursday hit and you’re going to have a chance to see the pilot.

After years of rumors about extending the supernatural franchise, The CW has decided to launch a backdoor pilot for a spinoff within the show’s current fourth season. Vampire Diaries executive producer Julie Plec will write the episode and serve as showrunner on the new project if it earns a series order.

The story centers around the original family of vampires and stars Joseph Morgan (Klaus). In the episode, Klaus “returns to the supernatural melting pot that is the French Quarter of New Orleans — a town he helped build centuries ago — and is reunited with his diabolical former protégé Marcel. Phoebe Tonkin, who plays sexy werewolf Hayley on TVD, is also set to star. The episode airs April 25. The working title of the spinoff is The Originals.

Leslie Morgenstein and Gina Girolamo will also serve as executive producers. Vampire Diaries showrunner Kevin Williamson, who also has his upcoming Fox show The Following, is not involved with the spinoff. The show is produced by Alloy Entertainment in association with Warner Bros. Television and CBS Television Studios.

Thanks to @EmilyKing1 for the heads up
Posted by Unknown at 21:05 1 comment: 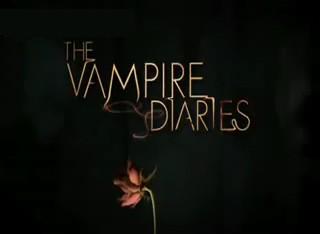 DANGEROUS LIAISONS — When Rebekah (Claire Holt) turns down Klaus’ (Joseph Morgan) plea to stop Kol (Nathaniel Buzolic) and protect Jeremy (Steven R. McQueen), Klaus turns to Stefan (Paul Wesley) for help.  After an angry confrontation with her father, Mayor Hopkins (guest star Rick Worthy), over his unconventional approach to ending the violence in Mystic Falls, Bonnie (Kat Graham) has a frightening run-in with Kol, followed by an unexpected visitor.  Klaus complicates the already tense feelings between Stefan and Damon (Ian Somerhalder) by revealing a bit of Stefan’s personal life, then surprises Damon by asking for personal advice.  Elena (Nina Dobrev) tells Stefan about her dangerous plan for Jeremy, leaving Stefan in a difficult spot.  When the high school’s 1980s Decade Dance is cancelled by Mayor Hopkins, Stefan finds a charming way to make it up to a disappointed Rebekah.  Brad Turner directed the episode written by Rebecca Sonnenshine (#412).
Posted by Col at 02:12 No comments: 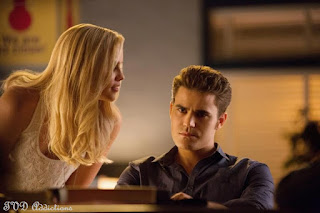 How will Stefan handle his breakup with Elena when The Vampire Diaries returns?

It depends on how you look at it. Stefan definitely spirals a bit when he realizes the depth of Elena's feelings for Damon. But he'll drown his sorrows with the help of a hot blonde. But which hot blonde?
Posted by Unknown at 07:50 No comments: 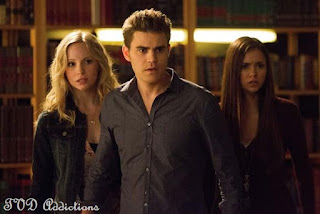 Hey, "Vampire Diaries" fans, are you guys still alive out there? It's been a long, cold month without any new episodes, but on January 17, we finally return to Mystic Falls, and Zap2it has your first look at episode 410 with this brand new sneak peek photo.


"After School Special" takes a cue from "The Breakfast Club," trapping many of our major players in the library and forcing them to confront some tricky issues. Of course, Mystic Falls High School is much more prone to death and destruction than your average Hughesian setting -- and since Rebekah's the one who has locked them in, you know things are going to get dangerous quickly. To say she's angry is an understatement, and she's not one to manage that in a healthy manner.

Elsewhere in the episode, we'll see that the death of yet another mayor has left a void in the town's political structure. Bonnie's MIA father, Rudy (Rick Worthy) steps in for the interim, so we'll finally see more of Bonnie's family life and learn just how far her father is willing to go to protect her in an increasingly dangerous environment. She's balancing his role in her life with Professor Shane's (David Alpay).

Meanwhile, back at the Lake House, Damon is helping to train Jeremy and work on killing enough vampires to complete his tattoo. Klaus isn't the most patient person, though, especially given his recent slaughter of his hybrid "family." He puts Matt in significant danger in an attempt to motivate Jeremy. (Never underestimate the bonds of bromance.)

Tune in January 17 at 8 p.m. EST to see it all shake out. (Fun fact: This is Candice Accola's second episode called "After School Special." She guest-starred in "Supernatural's" season 4 flashback episode of the same name.)
Posted by Unknown at 20:34 No comments: