FLASHBACKS TO THE FIRST VAMPIRE EVER SIRED — With tension running as high as ever, Klaus (Joseph Morgan) and Elijah (Daniel Gillies) are forced to come together in order to uncover Lucien’s (guest star Andrew Lees) true motives in New Orleans. Cami (Leah Pipes) is caught off guard when she finds herself face to face with Lucien and is surprised when he reveals some unexpected information about his past with Klaus. Elsewhere, a mysterious figure presents an enticing offer to Marcel (Charles Michael Davis), while Hayley (Phoebe Tonkin) turns to an unconventional way of coping with her current situation. Finally, an old acquaintance from Elijah’s past arrives in New Orleans and delivers some startling news involving the growing threat to the Mikaelson siblings. Yusuf Gatewood also stars. Michael Grossman directed the episode written by Declan de Barra & Michelle Paradise (#303). Original airdate 10/22/2015.
Posted by Unknown at 20:38 2 comments: 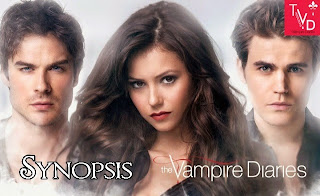 FLASHBACKS TO 1863 — In the aftermath of a clever plan orchestrated by Lily (Annie Wersching), Damon (Ian Somerhalder) sets off on a road trip with Bonnie (Kat Graham) and Alaric (Matt Davis) in search of leverage they can use against his mother. Meanwhile, Caroline (Candice King), who is being held hostage by the Heretics, learns some shocking information about Valerie’s past, while Stefan (Paul Wesley) learns a few unexpected details about his own past from Lily. Finally, Alaric turns to Bonnie for her help after coming clean about a secret he’s been keeping. Michael Allowitz directed the episode written by Melinda Hsu Taylor & Holly Brix (#703). Original airdate 10/22/2015.
Posted by Unknown at 20:36 No comments: 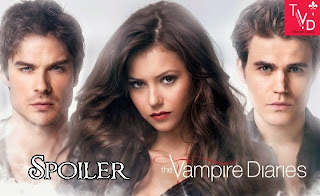 Vampire Diaries‘ Steroline shippers need to know if Stefan and Caroline will be together in the future timeline. Thank you!
Things are quite dire in the Oct. 8 premiere’s flash forwards, so romance isn’t really the priority. That said, Caroline and Stefan share plenty of screentime — and a few awkward, loaded silences — back in present day Mystic Falls.

Any positive Vampire Diaries spoilers you can give us on future Bonnie/Damon scenes?
Would you consider Bonnie playing chaperon to the vampire and Alaric’s drunken European adventures “positive”? How about Damon calling her his best friend? (Somewhere, Alaric is crying into his booze.)

Did The Vampire Diaries cast young Giusepe? I saw this pic on Annie Wersching’s IG profile. The actor in the pic is John Charles Meyer, and he looks really a lot like Old Giusepe.
A show rep confirms that Meyer – whose recent TV credits include Hawaii Five-0and Mom – will be playing the Salvatore boys’ dad in flashbacks, in Episode 7.
Posted by Unknown at 22:50 No comments:

I really want to know how Stefan will show his game to seduce Caroline on The Vampire Diaries!
Good question. So good, in fact, that we posed it to Paul Wesley and got this response: “He’s going to be sort of the same loving guy he’s been for the past six seasons — except when he was ripping people’s heads off. Man, Stefan’s killed a lot of people. Everyone on the show has. If you think about it, pretty much everybody on this show is a murder. Isn’t that wild?” Wesley’s tangent aside, it sounds like he’ll use the same tactics he did on Elena back in Season 1, but he’s definitely got his work cut out for him. “Caroline wants to be with Stefan, but she’s also trying to do the right thing by herself, taking the time to mourn her mother’s death so she can enter into this relationship with a clean state and a free mind. The heart wants what it wants when it wants it, so we’ll see moments where’s she’s struggling, wanting to say something but not knowing what to say.”
Posted by Unknown at 22:46 No comments:

ONE STEP AHEAD – When an impulsive decision by Damon (Ian Somerhalder) threatens to unravel a carefully negotiated deal between Stefan (Paul Wesley) and Lily (guest star Annie Wersching), he has no choice but to make amends with his mother before things spiral further out of control. However, Lily remains one step ahead and carries out a harsh plan that hits Damon where it hurts most. Elsewhere, after returning to Whitmore Collage, Alaric (Matt Davis) turns to Bonnie (Kat Graham) for help with a mysterious and potentially dangerous artifact he has obtained, while Matt (Zach Roerig) is forced into making a risky life or death decision. Meanwhile, Caroline (Candice King), who finds herself a pawn in Lily and the heretics' plan for retribution, uncovers a shocking detail about Stefan's past. Michael Malarkey also stars. Chris Grismer directed the episode written by Brian Young (#702). Original airdate 10/15/2015.
Posted by Unknown at 21:53 No comments:

The Originals - 3x02 "You Hung The Moon - Official Synopsis

IMPENDING THREATS AND A DIRE PROPHECY — After discovering that poachers have begun taking out werewolves in the bayou, Elijah (Daniel Gillies) and Jackson (guest star Nathan Parsons) grow concerned for Hayley's (Phoebe Tonkin) safety when she fails to show up during the full moon. Meanwhile, Davina (Danielle Campbell), the only one with the answer to Hayley’s whereabouts, plots ways to use that to her advantage. Elsewhere, Cami (Leah Pipes) approaches Klaus (Joseph Morgan) with her theory on who is behind the series of murders in the French Quarter, while Lucien (guest star Andrew Lees) delivers to Elijah an unsettling warning about the war brewing among the sire lines. Finally, after receiving a dire prophecy about the future of the Mikaelson siblings, Klaus takes extreme measures to determine the validity of this potential impending threat. Charles Michael Davis and Riley Voelkel also star. Jeffrey Hunt directed the episode written by Carina Adly Mackenzie (#302). Original airdate 10/15/2015.
Posted by Unknown at 21:51 No comments:

The Vampire Diaries - 7x01 "Day One Of Twenty-Two Thousand, Give Or Take" - Official Synopsis

LIFE WITHOUT ELENA — After a twisted plan left the life of his girlfriend Elena linked to that of his best friend Bonnie, Damon is forced to navigate his new reality without the love of his life. A newly empowered Bonnie has decided that she will be Damon’s moral compass and keeps a close eye on him as he, in turn, cautiously keeps tabs on Alaric, following the loss of his fiancée Jo. Meanwhile, as he waits for Caroline to sort out her emotions, Stefan takes an active role in protecting the town from Lily and her family of Heretics, who have wasted no time wreaking havoc in Mystic Falls. Elsewhere, Enzo struggles to find his place in Lily’s new life, and is quickly forced to decide where his true loyalties lie. Finally, with the stakes higher than ever, Matt, who has recently completed his deputy training program, teams up with Stefan and Caroline to put a stop to the Heretics, but an unexpected turn of events leaves one of them in a dangerous position.
Posted by Unknown at 21:45 No comments:

The Originals - 3x01 "For The Next Millennium" Official Synopsis

A WAR BREWING BETWEEN THE SIRE LINES — Months following their violent and deadly showdown with the powerful witch Dahlia, a rift continues to divide brothersKlaus and Elijah, while Freya searches for a way to heal their fractured bond and return their family to the way they once were. Meanwhile, Klaus’ suspicion piques when he learns that an old vampire friend named Lucien has arrived to New Orleans with a mysterious agenda involving the Mikaelson’s remaining sire lines. Elsewhere, Elijah questions whether he can truly forgive his brother for his mounting offenses, while Hayley struggles with being cursed to her wolf form in the bayou. In the French Quarter,Vincent and Cami assist Detective Kinney after a series of gruesome discoveries are made, leading them to believe they may have a serial killer on the loose. Finally, Marcel, who has regained control of the French Quarter once again, tries a new strategy to recruit vampires, while Davina, who is now Regent to the New Orleans witches, makes a decision that will find her and Marcel on opposite sides of an escalating conflict.
Posted by Unknown at 21:39 No comments:

The Originals - 2x14 "I Love You, Goodbye" Official Synopsis

THE BIG DAY — With the final preparations for her union to Jackson (guest star Nathan Parsons) underway, Hayley (Phoebe Tonkin) begins to question whether the ritual will actually work. After arriving to the compound, Elijah (Daniel Gillies) has a tense encounter with Klaus (Joseph Morgan) and quickly suspects that his brother may be up to something. Meanwhile, Kaleb (guest star Daniel Sharman), who is harboring a devastating secret from Davina (Danielle Campbell), seeks help from Rebekah (guest star Maisie Richardson-Sellers) when he realizes time is not on his side. Lastly, Cami (Leah Pipes) makes a startling revelation involving baby Hope. Charles Michael Davis also stars. Matt Hastings directed the episode written by Carina Adly MacKenzie & Michael Narducci (#214). Original airdate 2/16/2015.
Posted by Unknown at 07:43 No comments: 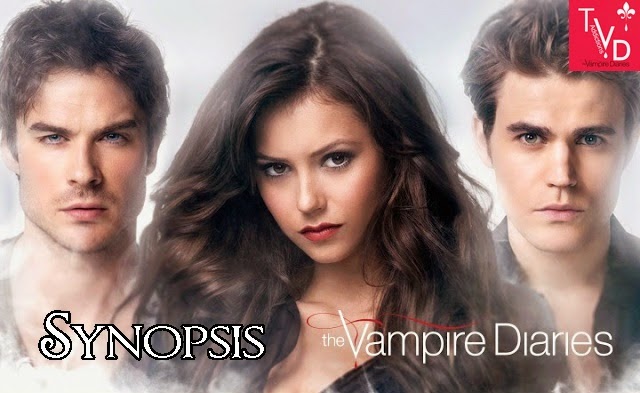 EXECUTIVE PRODUCER JULIE PLEC MAKES HER DIRECTORIAL DEBUT — After assigning tasks to each of her friends, Caroline (Candice Accola) attempts to deal with her current situation as reality begins to set in around her. While spending the day with Caroline, Elena (Nina Dobrev) grows concerned when she starts noticing a strange change in her behavior. Meanwhile, Alaric (Matt Davis) becomes wary when Kai (guest star Chris Wood), who has begun experiencing unexpected consequences from the merge, turns to Jo (guest star Jodi Lyn O’Keefe), desperate for her help. Elsewhere, while Bonnie (Kat Graham) finds herself in an unfamiliar situation, Matt (Zach Roerig) and Tyler (Michael Trevino) contemplate a major life change. And when Damon (Ian Somerhalder) offers Caroline advice on how to cope with everything going on around her, it forces him to revisit painful memories involving his own mother. Paul Wesley also stars. The episode was written and directed by Julie Plec (#615). Original airdate 2/19/2015.
Posted by Unknown at 07:40 No comments:

The Vampire Diaries - 6x13 "The Day I Tried To Live" Promo

The Originals - 2x10 "Brotherhood Of The Damned" Song List

Jack Norworth "Back To My Old Home Town" Ruelle "Up In Flames"
Posted by Unknown at 15:34 1 comment:

Email ThisBlogThis!Share to TwitterShare to FacebookShare to Pinterest
Labels: Promo, Season 2, The Originals

The Vampire Diaries - 6x11 "Woke Up With A Monster" Song List 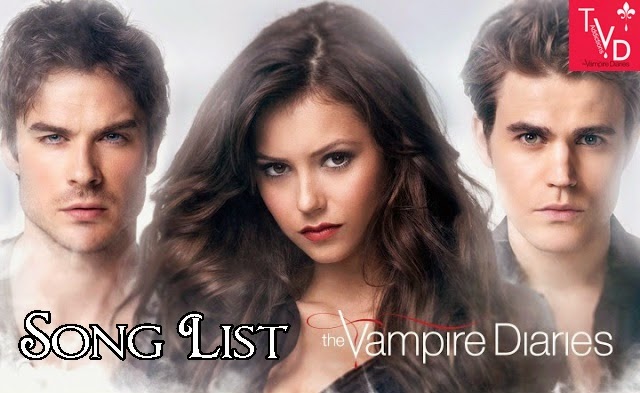 Jack White "I'm Shakin" Young Summer "The Waves That Rolled You Under" MTNS "Lost Track Of Time"
French For Rabbits "The Other Side" Phillip Selway "Don't Go Now"
Posted by Unknown at 14:04 No comments:

The Vampire Diaries - 6x12 "A Prayer For The Dying" Promo

The Vampire Diaries - 6x11 "Woke Up With A Monster" Webclip

The Originals - 2x11 "Brotherhood Of The Damned" Promo

Email ThisBlogThis!Share to TwitterShare to FacebookShare to Pinterest
Labels: Promo, Season 2, The Originals

The Originals - What Will The Rest Of Season 2 Bring?