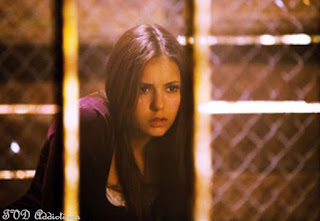 Is someone trying to keep Mystic Falls safe from bloodsucker-to-be Elena or are her loved ones trying to protect her from danger?

Either way, it looks like the locked-up baby vamp isn't feeding anytime soon. "She doesn't want to eat people, so she's hungry — and moody," warns The Vampire Diaries' Nina Dobrev.

And despite the best efforts of her vampire protectors Stefan and Damon, "we're going to worry about her a bit," warns executive producer Julie Plec. Sounds bloody good to us!

source
Posted by Unknown at 14:52 No comments:

Things are going to get a bit crazy when "The Vampire Diaries" returns for its fourth season on October 11. There's the fact that you know who became a vampire, a certain someone has possessed another certain someone, and Elena has seemingly picked one Salvatore brother over the other.
But while we're interested in the resolution of all of those plot points, we're also curious what the status of the Original Family is now that everyone thinks Klaus is dead (like it ever would be that easy). We recently had the chance to catch up with Daniel Gillies, the actor who plays brother Elijah, and asked him what we can expect from the Original vampire siblings in the coming season. Consider this your cue to stop reading if you aren't caught up on "The Vampire Diaries."
Daniel revealed that he had just come back from "The Vampire Diaries" set where he filmed a flashback scene set in the 11th century. He wouldn't dish what it was about, but he did say fans should "buckle up and get ready for wigs."
"I've had so many numerous haircuts on this thing. I feel like an accessory sometimes," he joked. "I feel like the Potato Head-vampire. I think this was my fifth hairstyle? And as we venture further through history, we're only going to find more absurdities upon my crown. The second to last one I had I adored, because I sort of looked somewhere between a Viking and an elf. This last one I looked like a roadie for the Grateful Dead in the 11th century."
Though Daniel is balancing his time on "The Vampire Diaries" with his other show "Saving Hope," he doesn't think Elijah will be going anywhere any time soon. Writer and executive producer Julie Plec has made it clear to Daniel that there's a role for him on "The Vampire Diaries" as long as he's around.
"Julie's been very generous, and I'm sure, as often as they can use me, they will," he said. "As long as there's 'Vampire Diaries,' there has to be Elijah. He's too woven into the fabric of it now. One cannot exist without the other."
When we mentioned that other characters have seemed to have the same sort of security—like, say, Elena's Aunt Jenna or our favorite vampire hunter Alaric—Daniel seemed to imply that he still wouldn't get the boot any time soon. And if he does, he just won't speak to Julie any time soon (his words, not ours).
"Elijah is going to be back, and what role do we expect him to play? I think Elijah brings order. Whenever he returns, shit gets done," Daniel explained. "He's sort of the stabilizer. There's always a shift in the equilibrium. I think he's the only one who can truly sort of restrain his brother. I think he's the only one with the dignity/lucidity to be able to strategize a way out of Mystic Falls and into some sort of sanctuary for their family. I'm not saying that's what he's going to do, I'm saying that's what he's capable of. I think if the family listened to Elijah, they'd be in an excellent place to position themselves in this very contemporary world that wants them all gone."
Klaus has been the main villain of "The Vampire Diaries" for more than a season and a half now, and it doesn't look like that will change any time soon. Now that he has possessed Tyler (and no one other than Bonnie knows about it), there's a good deal more drama that needs to be sorted out before Klaus can be defeated for good (if he ever can). But does that necessarily mean that a new villain won't step in to fill his shoes?
"A rising thing is a passing thing. So I mean, you're always in some sort of transition," Daniel said. "I think it would be arrogant and sort of naïve to assume that there won't be something else that would come to sort of eclipse the Originals in terms of this threat, because there's always a new menace— there has to be—to maintain an audience's interest. But I don't think the Originals are going to go anywhere for a little while."
Maybe that villain could be the new vampire hunter Julie said is coming to town, but it also could be the newly minted vampire version of Elena. Daniel teased that things have changed a lot on set ever since Nina Dobrev got her fangs.
"Nina Dobrev has become vicious. She's become a vicious, horrible diva. I can't even describe it," Daniel dead-panned. "She's driven to set even when it's indoors... Nobody's allowed to look at her. You have to look at the ground between takes... We end up doing most of our work to a green screen or to a tennis ball held in one of the assistant's hands. It's become nightmarish."
All joking aside, Daniel admitted that there is an air of confidence on the set of "The Vampire Diaries" that hadn't been there before.
"It's an interesting thing, walking back on the set and watching people entering back into the fourth season of something," he said. "I entered halfway through the second when it was still in a little bit of a capricious zone because it still could have fallen away at that point. There are no certainties in this business. But I feel like there is a degree of certainty with people coming back for a fourth season, and it's nice to see the sort of confidence radiating from people."
source
Posted by Unknown at 22:22 No comments: 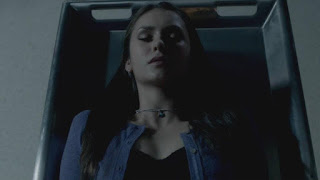 While some of the gang might be looking to help Elena fight her craving for a kill, there’s one person who certainly will not: Damon. Vampire Diaries executive producer Julie Plec says the elder Salvatore is rooting for Mystic Falls’ newest vamp to give in to what he feels is certain to happen. “In his mind, there’s an inevitability to being a vampire that we should just get to and get past. It's the equivalent of kicking Elena out of the bird’s nest and letting her fall and see if she can fly.” What do we say gang? Fight or flight?
Posted by Unknown at 10:58 1 comment: